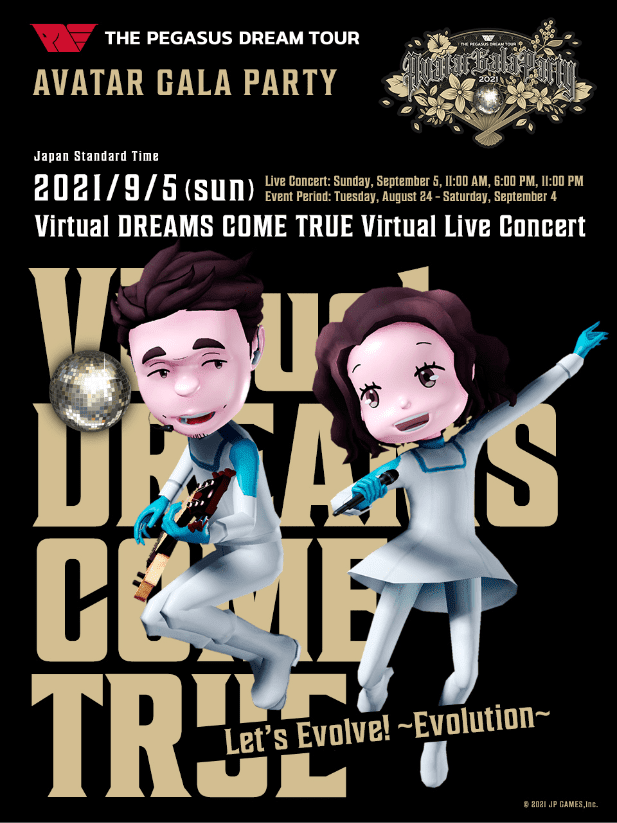 The para-sports festival “Pegasus Parasports Grand Prix” will be held in Pegasus City simultaneously with the real-life Tokyo Paralympics. Virtual DREAMS COME TRUE is scheduled to perform during its closing ceremonies, but to everyone’s surprise, the real athletes inside the venue start to undergo a “strange” sort of reaction to the proceedings … What will happen? Only those who witness this next-generation concert experience will find out!

"We’re gonna pump this grand finale up! We can’t wait to be able to perform together with the athletes’ avatars! Let’s get this party started!"

“We can’t believe that “The Other DREAMS COME TRUE” are going to perform at the closing ceremony of Pegasus Parasports Grand Prix! How come Virtual DREAMS COME TRUE gets to have all the fun!? We can’t wait to watch them with the rest of you!”

DREAMS COME TRUE is a group comprising Masato Nakamura (bassist, composer, and arranger) and Miwa Yoshida (vocalist, composer, and performer). With this duo at its core, DREAMS COME TRUE has been flexibly adapting to the times in terms of music composition. In particular, the group’s music has taken a new direction since 2019, the 30th anniversary of their debut. In the single “YES AND NO/G” released in 2020, they created a novel sound that foreshadowed the group’s own imminent evolution, and in their latest album, “DOSCO prime,” the duo deconstructed their own music before reconstituting it again through a conversion-based approach. On September 22nd (Wednesday), DREAMS COME TRUE will be releasing their new song, “Tsugi no se no! -ON THE GREEN HILL DCT VERSION-” (a tie-up track for Ito En’s “Oi ocha”)!
This new release is made possible by an unprecedented three-way collaboration between Japan’s national brand “Oi ocha,” the world-famous character Sonic the Hedgehog, and DREAMS COME TRUE, and it will serve as a multiverse-like work that bridges the group’s past and future. Masato Nakamura has also composed and arranged the music for the timeless mega-hit game “Sonic the Hedgehog 1&2.” “Emerald Hill Zone” will be used for the Hollywood blockbuster “Sonic the Hedgehog 2 (2022) - Title Announcement - Paramount Pictures,” which will be released next year, while “Star Light Zone” was featured during the parade of athletes at the Tokyo 2020 Olympic Games, which caught the attention of many people.
DREAMS COME TRUE Official Site